Mahakal Tattoo Design on the Back

You are here: Home1 / Mahakal Tattoo Design on the Back

Getting tattooed is an experience that you will remember for the rest of your life, and if you are spiritually attached to the artwork, there is nothing greater. In an individual’s search for purpose in life, those who seek the divine frequently come across complex notions and intriguing concepts about God. Now, the idea of getting a Mahakal tattoo on the back are frequently intertwined with mythology and their interpretations of it as a means of self-expression. Connecting in depth the emotion that an individual feels for majority of the existence to accumulate them into an artwork of expressing themselves in an undulated manner through inking it into themselves. 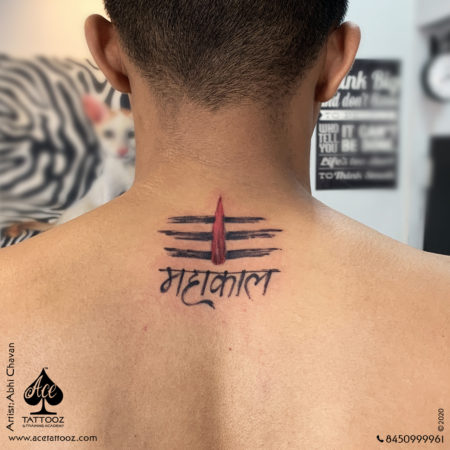 Mahakal also generally known as Lord Shiva is considered to be one of the strongest and most unique gods in the Hindu religion and belief since, he embodies both good and evil. People often get a Mahakal Tattoo on back as Lord Shiva is commonly seen as the remover of bad energy, allowing positivity to flow throughout. This destructive mentality is sometimes seen as furious and wrathful, which is why he is frequently shown in fury. Shiva exhibits the magnanimous attitude since he created himself out of emptiness.

There is no question that Mahakal Tattoo on back is very popular among today’s youngsters for a variety of reasons. So, they don’t really need any reasons to get a Mahakal tattoo on back, of this fantastic Deity whose tandav is as well-known his followers known as the bum-bum-bhole association, whether you’re high on life or just a pure follower of the Lord.

Beyond the ‘chillum’ component of the Lord, Mahakal Tattoo on back has grown to signify a lot of things and has a lot more resonance for people. From being the most powerful God among the Hindu Lords, whose third eye once opened opens forth an ocean of devastation, to being the serene Lord, sitting on his mountain top, Lord Shiva has many incarnations, and the admiration to get Mahakal Tattoo on back for each or any of them is popular. You may also check the Best Lord Shiva Tattoo Design.