Check out our Top 15 best colour tattoo designs. Colour Tattoos is a new style of tattoo art and it is getting remarkable nowadays. People want their tattoo to be more meaningful, colorful, vibrant and unique. Color Tattoos is the new trend which is very much popular among youngsters.
[bg_collapse view=”link-list” color=”#72777c” link_align=”center” icon=”arrow” expand_text=”Read More” collapse_text=”Show Less” ]
Apart from this, every color has its own significance and once it is inked, it describes one’s personality and adds more meaning to it.
Ace Artist Archana Nakhua Bhanushali is one of the Best Colour Tattoo Artist in India.
Let us look at our Top 15 Best Colour Tattoo designs at Ace Tattooz & Art Studio Mumbai and also take a look at our best Colour Tattoos.
We are also one of the best semi permanent makeup training academy in mumbai.

Life and death are the best teacher to give u lessons of attachment as well as detachment and that’s what he explained me when he said m looking for my next tattoo di, i was sure m giving him something he feels connected to all his life and what more could have i asked for except for some artistic freedom from our old client dharmesh anchan . He wanted a eye to signify peace and we were sure he was right about it and the most beautiful part was adding on his favorite parrots he loves so much he would never cage them but let them fly , because when u love someone u let them b in their element and not change them to your likes our human would always want a ace element in his tattoo and hence we did those little aces in the mandala which don’t shout too much but will always b there along his side. 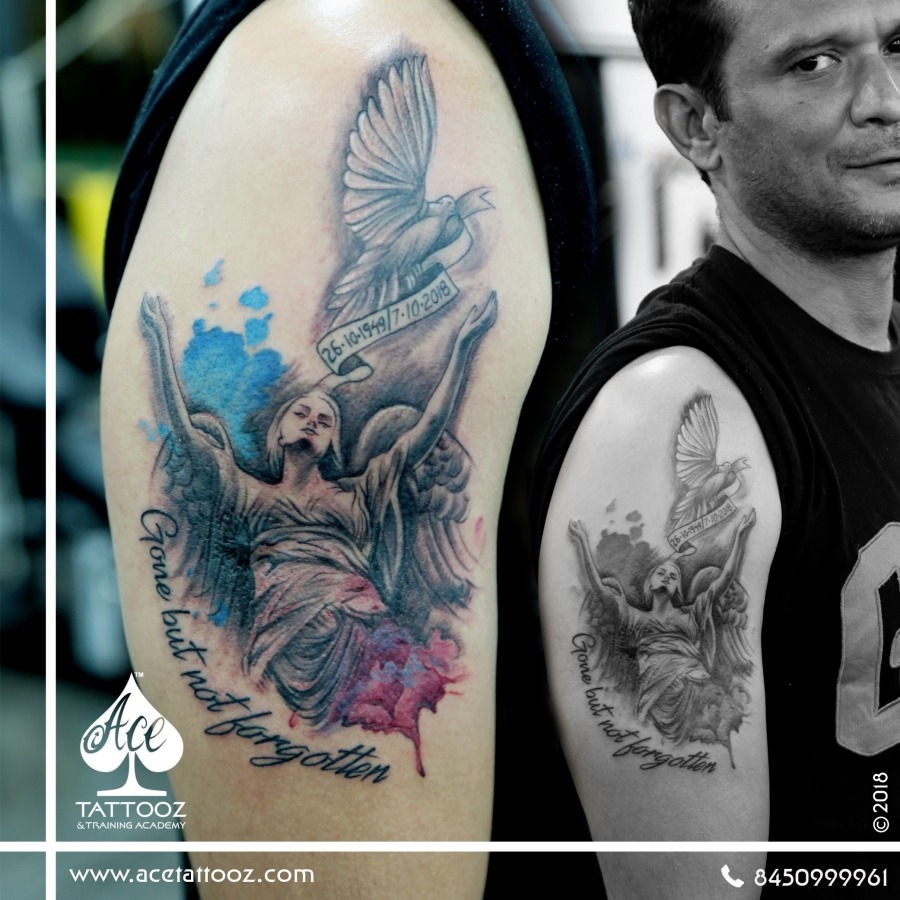 This one for our old client and friend who wanted to dedicate his tattoo to his mother, his angel, his everything now breathes along with him forever in the form of this tattoo. 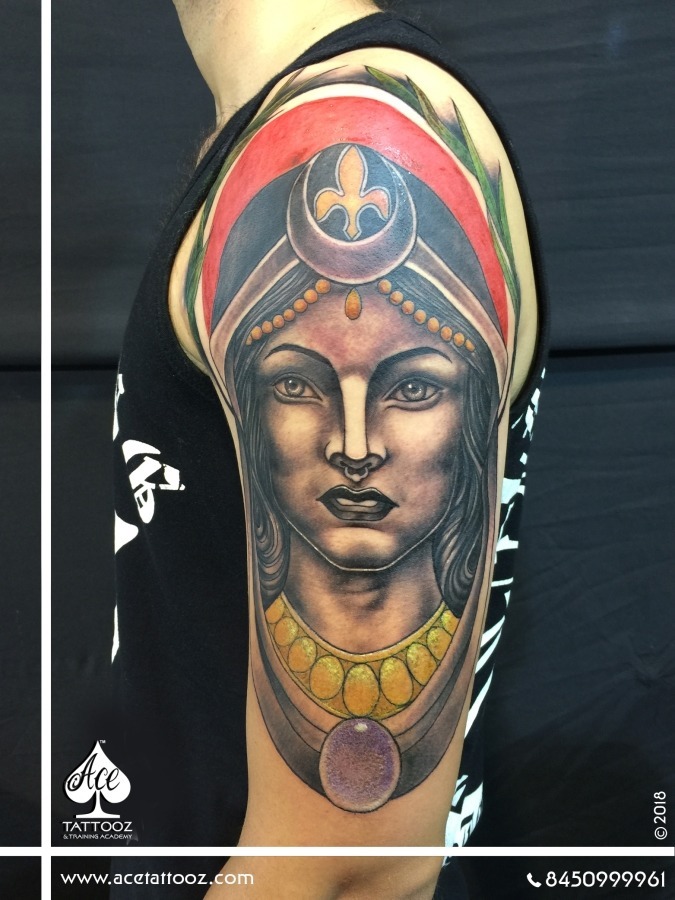 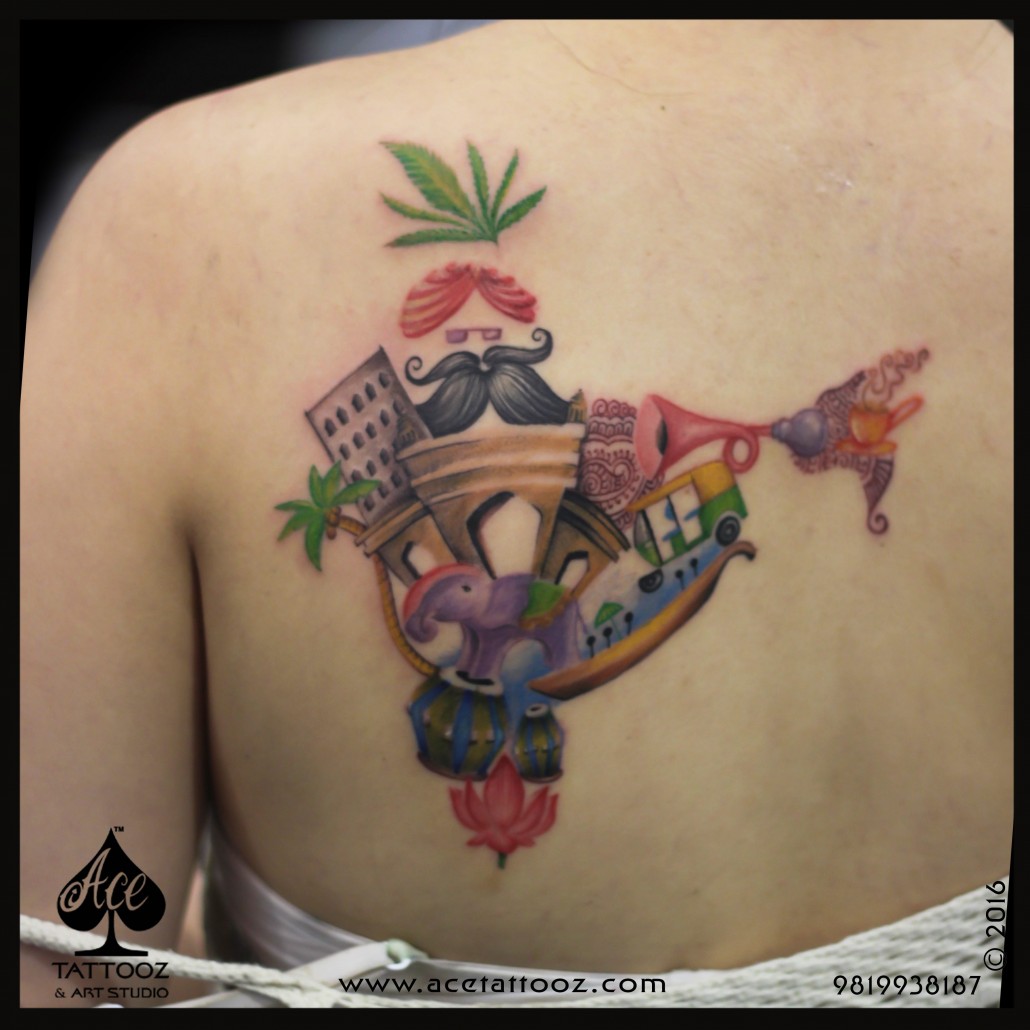 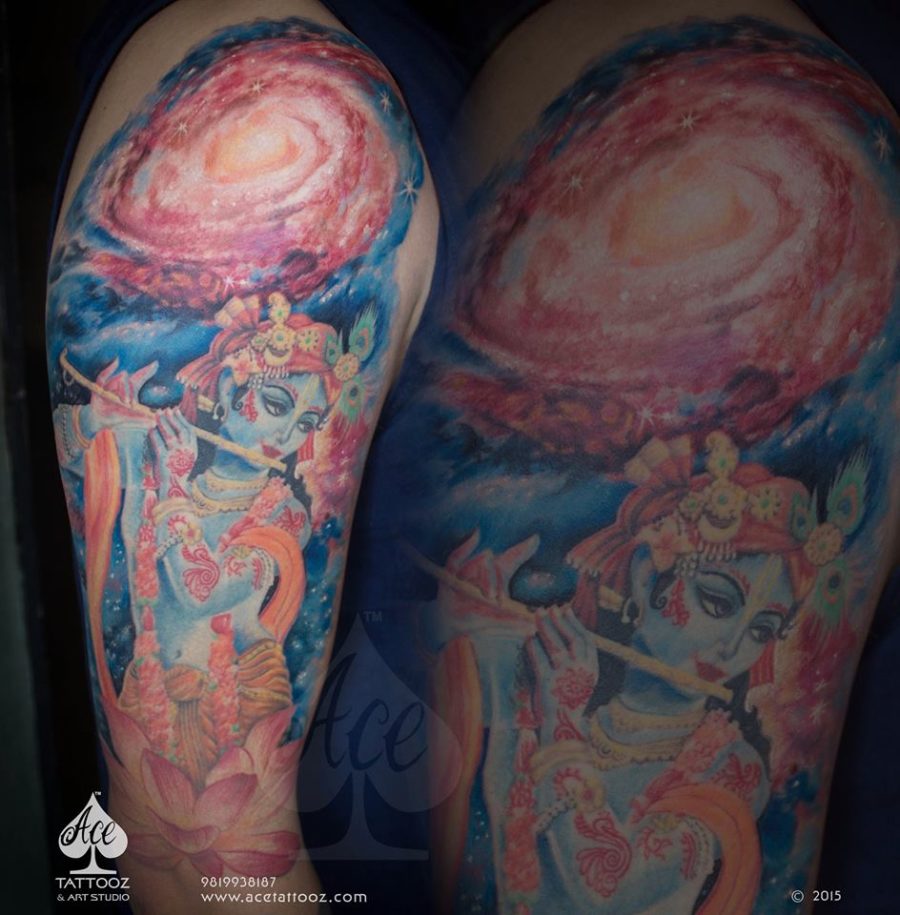 Lord Krishna is a popular Hindu tattoo subject for his beautiful blue appearance, clad in gold and fine fabrics, and his symbol of the Universe’s infinite abundance. Krishna is depicted as the 8th incarnation of the Lord Vishnu.
[bg_collapse view=”link-list” color=”#72777c” link_align=”center” icon=”arrow” expand_text=”Read More” collapse_text=”Show Less” ]
He is the embodiment of love, divine joy & abundance, that destroys all pain, lack and sin. He was born as the 8th child of Devaki, and he was brought up in a cowherds family and loved to play the flute. This Lord Krishna Tattoo design beautifully represents his love towards music and universe. 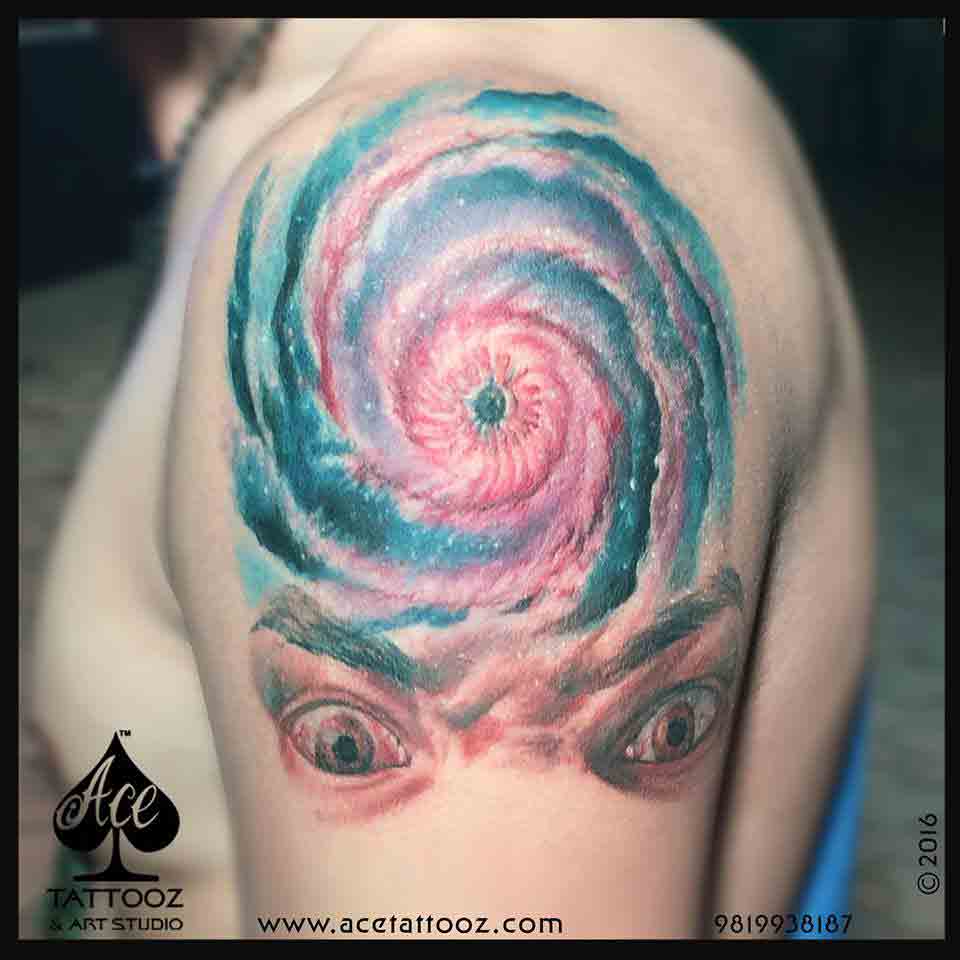 Third eye is associated with enlightenment, intuition, inner wisdom, clairvoyance, and for all you yoginis – the sixth chakra. Hinduism feature the third eye as a dot in the middle of the brow.
[bg_collapse view=”link-list” color=”#72777c” link_align=”center” icon=”arrow” expand_text=”Read More” collapse_text=”Show Less” ]
Ace Tattooz and Art Studio does customization as per client’s requirement and hence came up with this beautiful concept of Third Eye Colour Tattoo to represent your inner brilliance. Colorful Lord Shiva Tattoo by Ace Tattooz, the best tattoo studio in Mumbai, India. 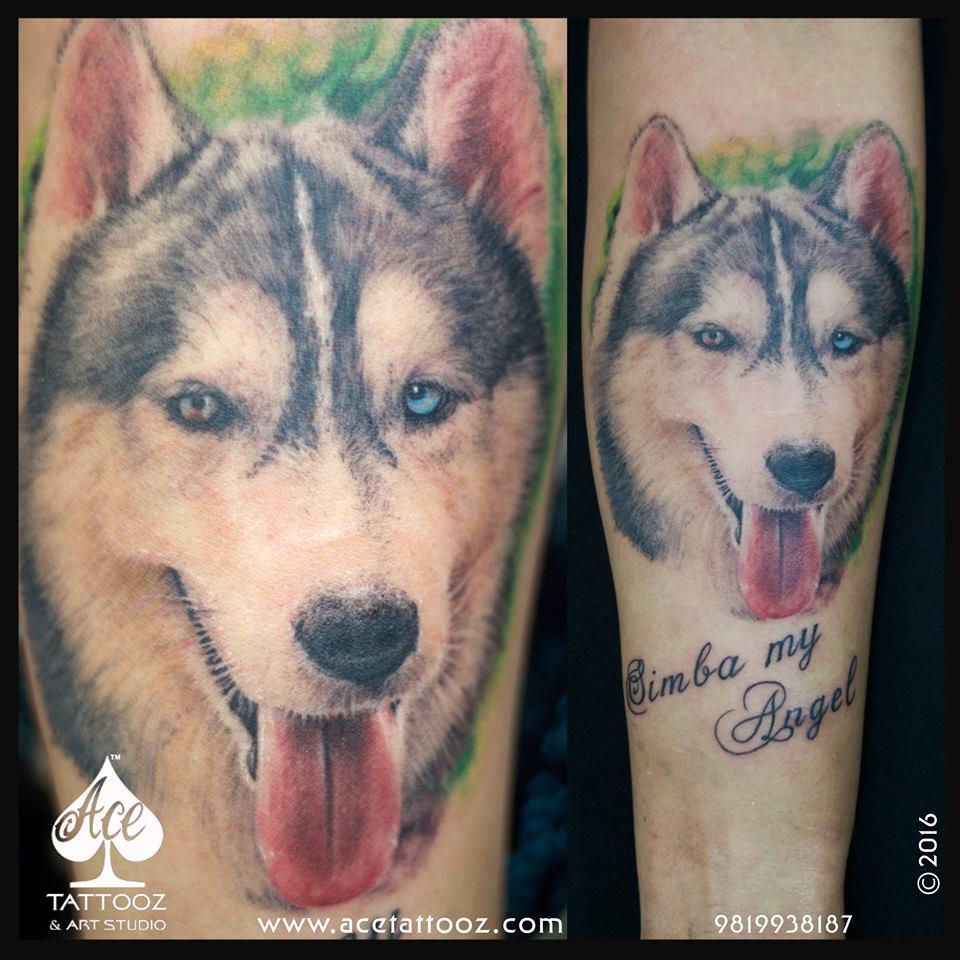 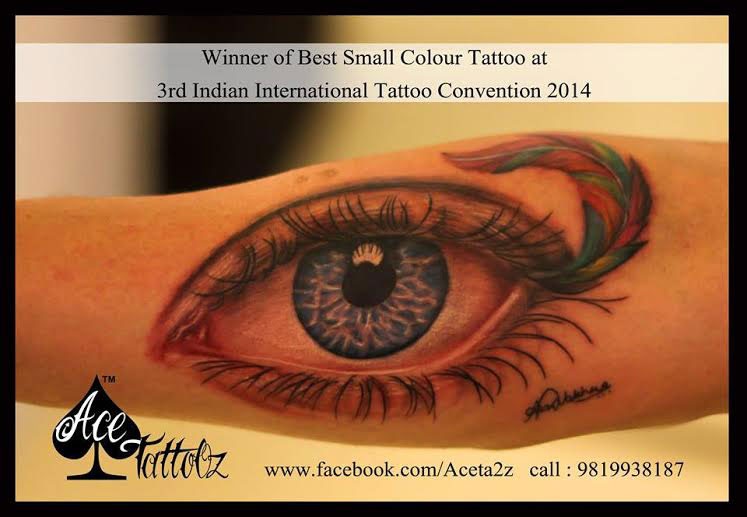 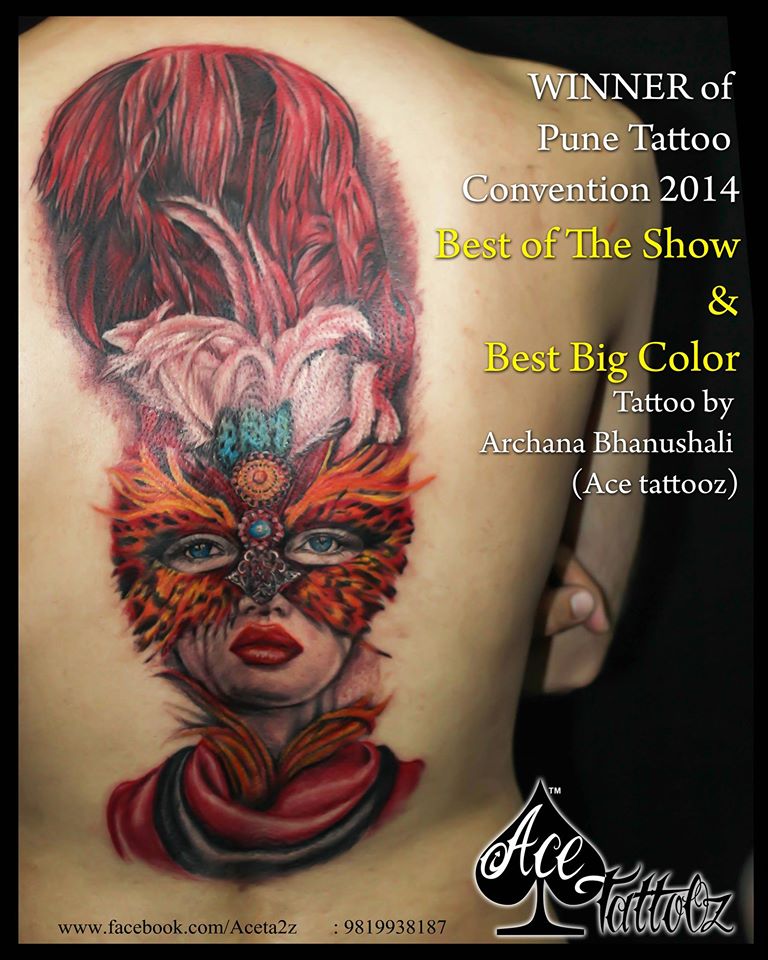 Awarded Big Colour Tattoo by Ace Tattooz, the best tattoo studio in Mumbai, India. This is from one of our beautiful Back Tattoos collection. 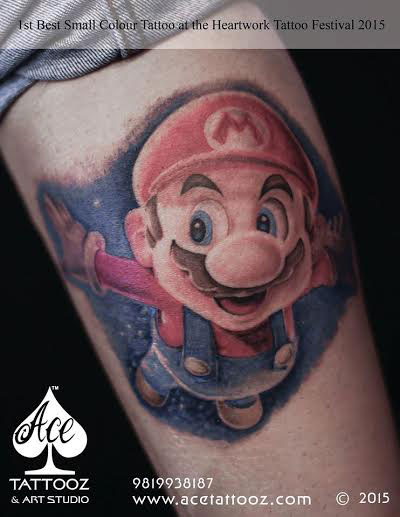 Mario is one of the most recognizable names in the gaming industry. Gamers all across the world hold a special place for it in their heart. Mario has a huge fandom over the world and it sure is the name that comes to one’s mind when someone says “video games”.
[bg_collapse view=”link-list” color=”#72777c” link_align=”center” icon=”arrow” expand_text=”Read More” collapse_text=”Show Less” ]
Nothing can beat those days when you spent all your time arguing over who will play Mario, Luigi, Yoshi, Donkey Kong or Toad in the video game series Super Mario Bros which was created by Nintendo. It is no wonder that we try to bring back those memories by getting Mario tattoos. Check out in Color Tattooscollection, by Ace Tattooz, the best tattoo studio in Mumbai, India. It is one of the best colorful tattoos for guys. 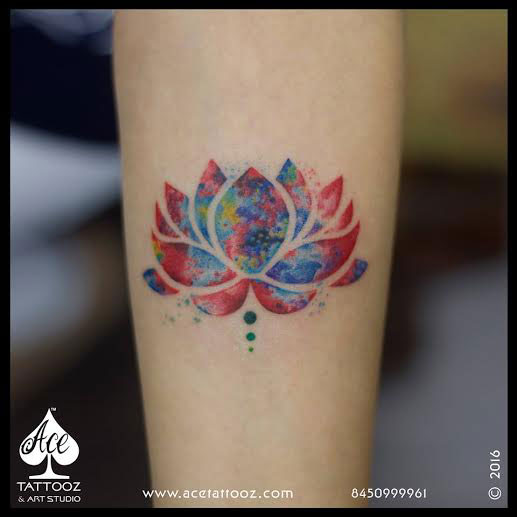 Lotus Flower Tattoos designs are widely preferred by tattoo lovers all around the world. Popular amongst both, men and women, lotus design is not only revered for its beauty but also reflects a deeper spiritual meaning.
[bg_collapse view=”link-list” color=”#72777c” link_align=”center” icon=”arrow” expand_text=”Read More” collapse_text=”Show Less” ]
The flower grows in muddy water, yet symbolizes purity and harmony. It is a multi-color tattoo which holds a deeper meaning as it comprises of all the three primary lotus colors i.e. white, pink and blue. It holds a mystical view of the realm of spirituality. It is said that a lotus shares an emotional and vibrational bond with Lord Buddha himself. As a tattoo design too, lotus stands for the same attributes in human nature and depicts the thoughts and attitude of the bearer. This is beautiful Lotus Color Tattoo by Ace Tattooz, that’s why it is included in this top 15 best colour tattoo designs category. 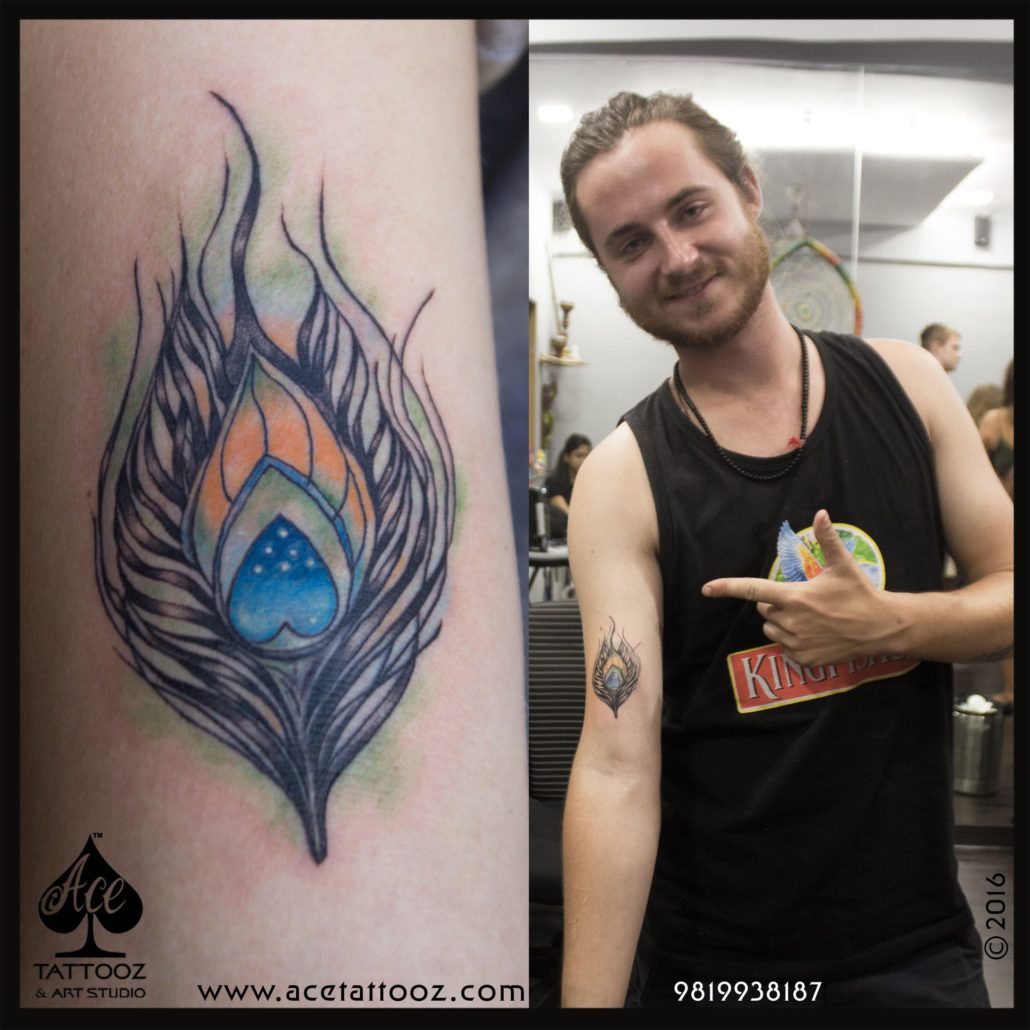 Peacocks represent more than just beautiful little birds. They embody glory, vanity, beauty, spirituality, renewal and spiritual awakening, immortality, refinement, purity (White Peacock). Peacock is the national bird of India as it is a symbol of serenity.
[bg_collapse view=”link-list” color=”#72777c” link_align=”center” icon=”arrow” expand_text=”Read More” collapse_text=”Show Less” ]
It is said that a peacock defends mankind from evil spirits. The bird is a sign of resurrection and God’s grace and also signifies compassion. From Bird Tattoos Collection this is a beautiful Lotus Color Tattoo by Ace Tattooz, the best tattoo studio in Mumbai, India. 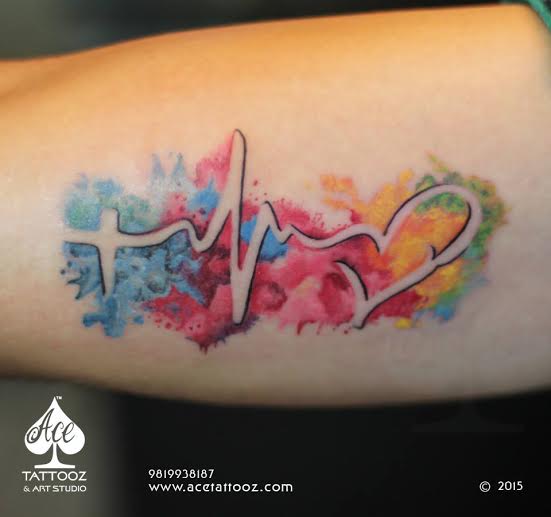 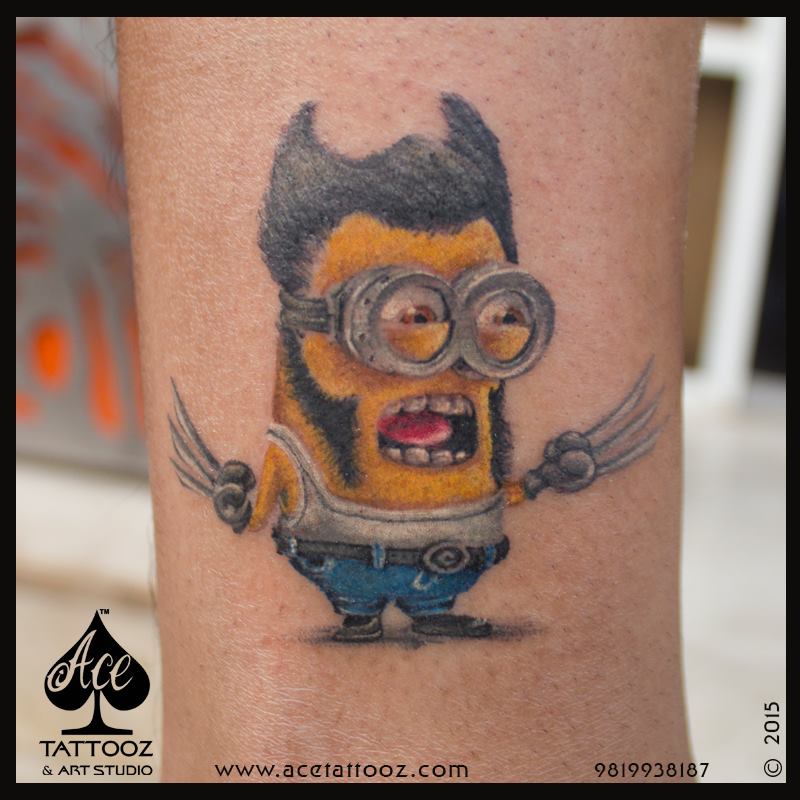 These adorable and funny creatures were introduced in the movie “Despicable Me” from Universal Pictures. They gained so much popularity, that the creators couldn’t help but create a spin-off based on them.
[bg_collapse view=”link-list” color=”#72777c” link_align=”center” icon=”arrow” expand_text=”Read More” collapse_text=”Show Less” ]
They hold a very special place in our hearts. Wonderful minion tattoo in action – Minions created a lot of buzz around the world. These adorable creatures captured hearts of children as well as adults. The above tattoo looks amazing and it is something that most youngsters would envy for. This is a minion portraying as one of the most awesome marvel comic characters i.e. Wolverine. From Color Tattoos collection this is a beautiful Small Minion Tattoo by Ace Tattooz, the best tattoo studio in Mumbai, India. 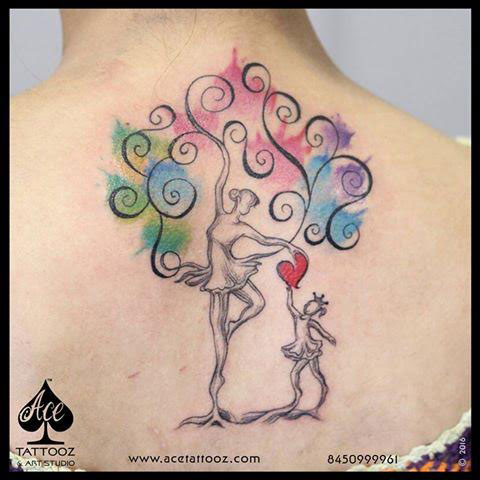 Mothers and Daughters go through a lot with one another. A mother is always there for her daughter, even in the darkest hours. Her compassion for her child never fades away. The relationship is eternal and pure, and nothing in this world can hinder it.
[bg_collapse view=”link-list” color=”#72777c” link_align=”center” icon=”arrow” expand_text=”Read More” collapse_text=”Show Less” ]
They share an unbreakable bond, an understanding of each other like no one else ever could. They are each other’s best friends and confidants. This Colorful Tattoo is describing the Mother-Daughter love and thus becomes the perfect way to honor that relationship. This could be, without a doubt, one of the best colorful tattoos for females. That’s why it is included in Top 15 Best Colour Tattoo Designs. 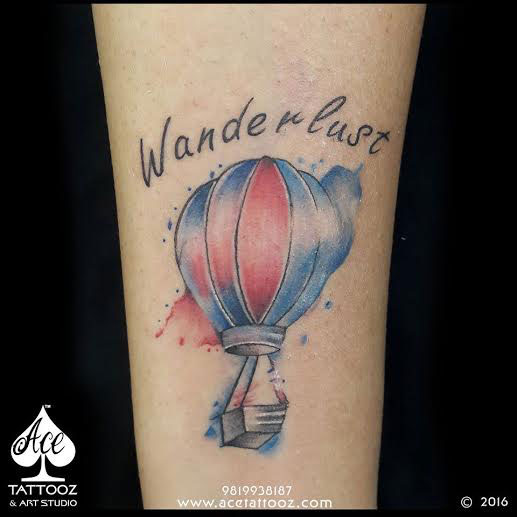 Ace Tattooz is a firm believer that tattoos should represent what you stand for and believe in. That is precisely the reason why We’ve suggested Wanderlust colour tattoo to our client after knowing her.
[bg_collapse view=”link-list” color=”#72777c” link_align=”center” icon=”arrow” expand_text=”Read More” collapse_text=”Show Less” ]
“Wanderlust is a strong desire or urge to wander, travel and explore the world”. This is the best colour tattoo for the ones who know that travelling around the world is their passion. The hot air balloon depicts that the whole vivid world can be traversed by air. This work here is one of the most beautiful colourful tattoo designs. 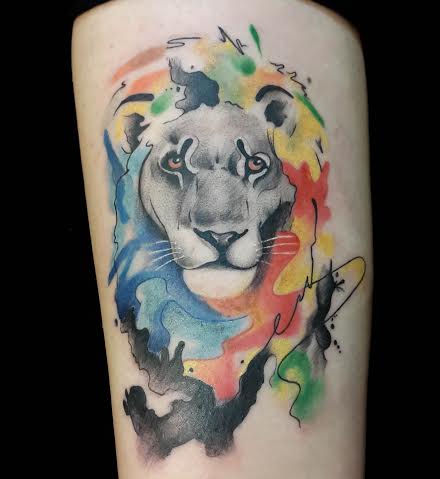 Lion Tattoo, is one of the most popular among animal tattoos. People love lion tattoos not only for its cool appearance but also for its rich symbolic meaning.

These tattoos are eternally liked by men, who take it as a symbol of leadership and masculinity. t is an abstract imagery of a lion with the watercolor being used to color the mane of the lion and grayscale has been used to color the face, giving it a more vivid yet gritty appearance. This tattoo is a perfect example of the mysticism that is present in the lion; as a spirit animal and thus gets marked as one of the best lion tattoos on arm in our collection. This qualifies as one of the best colorful tattoos for females. 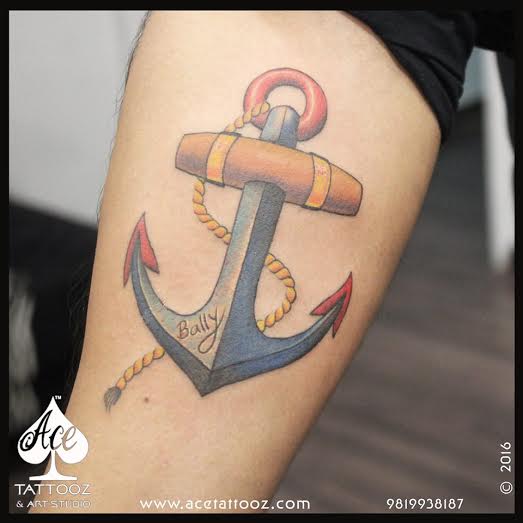 Anchor is a Roman symbol that indicates anchored personality that does not waver no matter how stormy the sea is. These Color Tattoos are usually designed in black & blue color.