For thousands of years, humans have been using Tattoos as a way to show their affinity for text, symbols (7 images to represent themselves and decorate their body. In ancient times tattoos were believed to be used as shields to protect them from the unknown. One such belief from ancient Egypt was during pregnancy, women would tattoo a figure of a deity on their thighs which was believed to protect them during childbirth. Even today people use tattoo as a way to express their spirituality and religious beliefs. Tattoos with a meaning attached to a person can be expressed as a road sign signifying the spiritual journey of a person. One such way of wearing your faith as fashion can be done through God tattoos in Hindu religion. An interesting fact is that Hindu religion is believed to have over 33 Million Gods and each God is believed to have a unique power or blessing to provide the deity.

Here are the Top 5 God Tattooz from Ace Tattooz 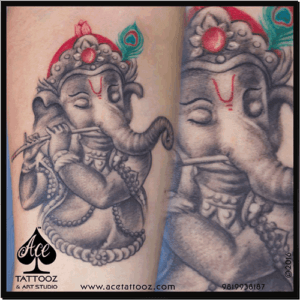 Ganesha known as the remover of obstacles is one of the most worshipped by Hindu. He has a head of an elephant which symbolises wisdom and a potbelly which symbolises he can digest all pleasant and unpleasant things in life. Ganesha playing the flute in this tattoo lilse Krishna reminds us to enjoy life through music. 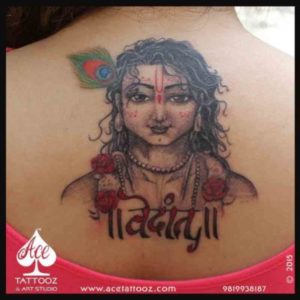 Lord Krishna is believed to be the creator and maintainer of the universe. With childlike innocence on the face, he is the one who attracts all and provides them bliss. The tattoo symbolises his love for the world through his eyes and wearing a morphine which contains all seven colours and is regarded as a blissful bird. 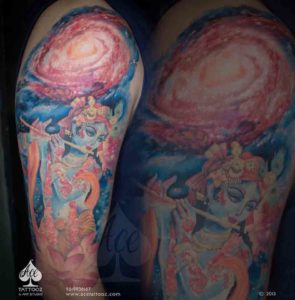 Tattoo with a view of Krishna and the universe just created, as according to Bhagavad-Gita the creator of the universe is Lord Krishna. A good reminder of the universe being created as Krishna is playing his flute for us to enjoy the life given to us. 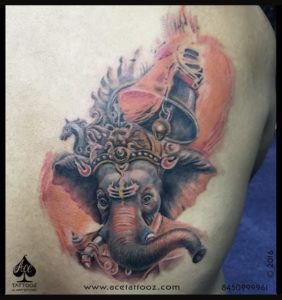 A powerful looking Ganesha tattoo with his trunks turned to the right which denotes siddhi. This is the reason Ganesha is also called as Sidhdhi Vinayals. The tattoo symbolizes positivity, power, and lot of strength to overcome all the obstacles in our life. 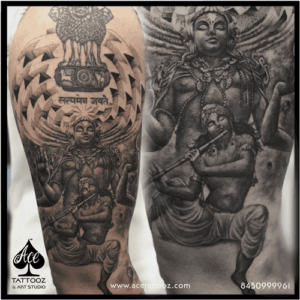 This tattoo is a mixture of the National emblem of India with a portrait of Vishnu Cr Krishna.

A perfect amalgamation of National emblem symbolizing courage, power, confidence and pride, mounted on a circular base along with Vishnu the preserver and protector of the universe and Krishna considered to be an incarnation of Lord Vishnu playing his flute and lost in trance. These tattoos reinforce our belief that there is a much greater power out there that will carry us through both, times of suffering and times of happiness. Check out other Ace Tattooz God tattoos along with many other amazing tattoos on https://acetattooz.com/god-tattoo-designs/
Read more
Read less
Rexal Tubes Become a Tattoo Artist with Ace Tattooz
Scroll to top